The last 100 kms of the Camino de Santiago from LUGO

Price per person | VAT included
Based on double occupancy

Includes all dinners except in Lugo and Santiago

Supplement of 5 takeaway picnics during each stage (includes sandwich, drink and snack)

Relax your muscles after each stage with a 40 minutes sesscion, we move to your accommodation for your comfort.

Guided visits and trips around Galicia

End your trip visiting some of the most beautiful places of Galicia such as Fisterra, Rías Baixas, Ribeira Sacra or the Galician cities.
Have a look at our guided visits section.

The Primitive Way from Lugo to Santiago will allow you to apply for the Compostela certificate, this route that can be completed in only 7 days has a distance of more than 100 kilometres. The Primitive Way is the first historic route and the oldest one of all the paths of the Camino de Santiago. It was the itinerary done by the monarch Alfonso II the Chaste to visit the grave of the Apostle Santiago in the ninth century. You will be able to enjoy the impressive ancient town of Lugo, walk along its walls and take pleasure in its gastronomy and its tapas bars. You will depart from the city of Lugo and the path will take you to small towns such as San Román da Retorta, Ferreira and Hospital das Seixas, the last village of the province of Lugo. You will cross the mountains of Careón to reach the province of Coruña traversing the towns of Toques, Melide, Arzúa and O Pedrouzo and finally get to Santiago. In Melide you will join to the pilgrims that walk the French Way and in Arzúa you will meet those who complete the Northern Way.
Read more

At Galician Roots, we are specialised in offering to our clients customised tours of the different paths of the Camino de Santiago and personalised trips of Galicia.
If you wish to visit a particular place, if you want to relax with a massage after arriving at your destination, taste traditional food, take part in celebrations or events… just let us know and we’ll help you organise your best holiday in Galicia. 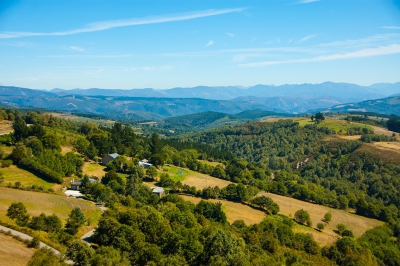 The PRIMITIVE Way from A FONSAGRADA to Santiago